Every Easter Christians around the world celebrate the resurrection of Jesus Christ.  That event is the  most important to the Christian faith.  Why?  Jesus explained it best.  At the Last Supper, as He gave some final teachings to His disciples, He said, “Because I live, you will live also." (John 14:19 NKJV) He had just told the disciples that He would be crucified and given them the bread and wine as symbols of His impending crucifixion.  Jesus knew He was about to die, yet He told them, "Because I live, you will live also."  Although Jesus knew He was about to die to pay for our sins, He also knew He would rise from the dead three days later, proving that all He said was true.  A dead man can save no one.  Eternal life can only be given by one who possesses eternal life, one who is immortal and has conquered death.  Jesus' resurrection demonstrated that He has the power to conquer death and give us eternal life.  The grave is only a temporary resting place for the body of a believer.  Just as Jesus was resurrected, so shall we be when He returns.  The trumpet will sound and we will be raised from our graves with incorruptible bodies to live with God forever.  Because He lives, we will also live. 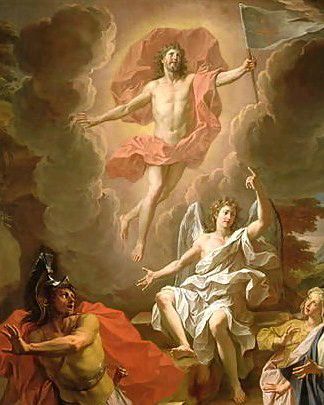