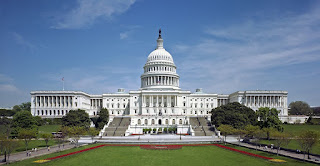 First, remember God is in control, not the government.  During His trial, Jesus told Pilate, “You could have no power at all against Me unless it had been given you from above.” (John 19:11, NKJV)  After His resurrection, Jesus told His disciples, “All authority has been given to Me in heaven and on earth.” (Matthew 28:18, NKJV)  God is the sovereign king of the universe.  He is in control.  God places people in positions of power and removes them at His pleasure.  Instead of fretting about who is in office, trust in God’s sovereign plan.

Second, pray for our leaders.  No matter who is in office, we should pray for them.  The Apostle Paul wrote to Timothy, his protégé and ministry partner, “Therefore I exhort first of all that supplications, prayers, intercessions, and giving of thanks be made for all men, for kings and all who are in authority, that we may lead a quiet and peaceable life in all godliness and reverence.” (1 Timothy 2:1-2, NKJV)  We must remember that Paul wrote those words while Nero was the Emperor of Rome, who persecuted Christians.  Even if the person who is in office is a bad leader, we should pray for them anyway – pray that God would change their heart and make them a good leader.  If the person who is in office is good, pray they stay that way.

Third, obey our leaders.  The Apostle Paul wrote these words to the Christians in Rome:

Let every soul be subject to the governing authorities. For there is no authority except from God, and the authorities that exist are appointed by God. Therefore whoever resists the authority resists the ordinance of God, and those who resist will bring judgment on themselves. For rulers are not a terror to good works, but to evil. Do you want to be unafraid of the authority? Do what is good, and you will have praise from the same. For he is God’s minister to you for good. But if you do evil, be afraid; for he does not bear the sword in vain; for he is God’s minister, an avenger to execute wrath on him who practices evil. Therefore you must be subject, not only because of wrath but also for conscience’ sake. For because of this you also pay taxes, for they are God’s ministers attending continually to this very thing. Render therefore to all their due: taxes to whom taxes are due, customs to whom customs, fear to whom fear, honor to whom honor.  (Romans 13:1-7, NKJV)

Ouch!  In other words, we must obey our leaders, even those we do not like or deem worthy, for three reasons: 1. God put them there.  2. You will risk the wrath of God and the leaders if you don’t.  3. You must obey them to have a clear conscience.  There is only ONE exception to this rule in the scripture, found in Acts chapter 5.  That chapter records the interaction of the Apostles with the Sanhedrin.  When the Sanhedrin commanded the Apostles to stop preaching about Jesus they replied, “We ought to obey God rather than men.” (Acts 5:29, NKJV)  If the authorities tell you to do something contrary to God’s commands, you are not obligated to obey.  God’s commands outweigh the commands of men.   Otherwise, we are commanded by God to obey our leaders.

Fourth, honor our leaders.  Once again, Apostle Paul told the Romans to give honor to those to whom it is due. (Romans 13:7)  Also, Peter, the same man who defied the Sanhedrin, wrote, “Honor all people. Love the brotherhood. Fear God. Honor the king.” (1 Peter 2:17, NKJV)  We are not to be churlish and rude to our leaders, even those with whom we disagree.  Instead, we are to show respect to them, as we should to all people.  Honor and respect are sorely lacking in our society today.  To dishonor our leaders is, ultimately, to dishonor God.  How can we claim to be a good Christian when we act with contempt toward others?  How can we talk of God’s grace, when we do not extend grace to others?  A bad attitude ruins our witness.